After seeing our daughter hand trim the tenderloin I couldn’t wait to get it to the grill. I followed Weber’s instructions for a three-zone split fire using a drip pan in the middle to wall the charcoal off to both sides leaving the center as the indirect heating zone. 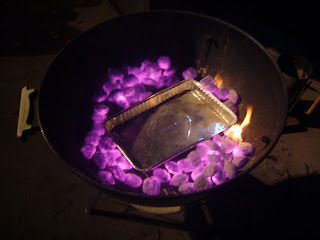 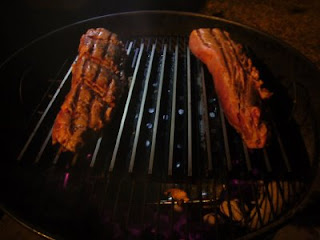 moving them to the middle of the GrillGrates to complete the grilling. The tenderloin took about 10 minutes longer than Weber estimated and I attribute that to the GrillGrates acting as a flame shield that further protected the meat. Knowing that our clan likes their meat rare, I took the tenderloin off a bit early and gave it a short rest before cutting thick juicy red slices. The trimmed loin fed 8 of us without a slice left and not one plate had any evidence left of a great meal. The meat literally melted in my mouth and the pressure was off. We switched from Pigs Nose (smooth as a Pigs Nose) to Champagne with strawberrys crushed and pureed in the bottom of the glass. The Champagne was so good it carried over to an after dinner treat. There was a StarTrek marathon on TV, the kids retreated to their worlds and we went quietly into space.